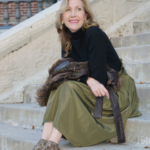 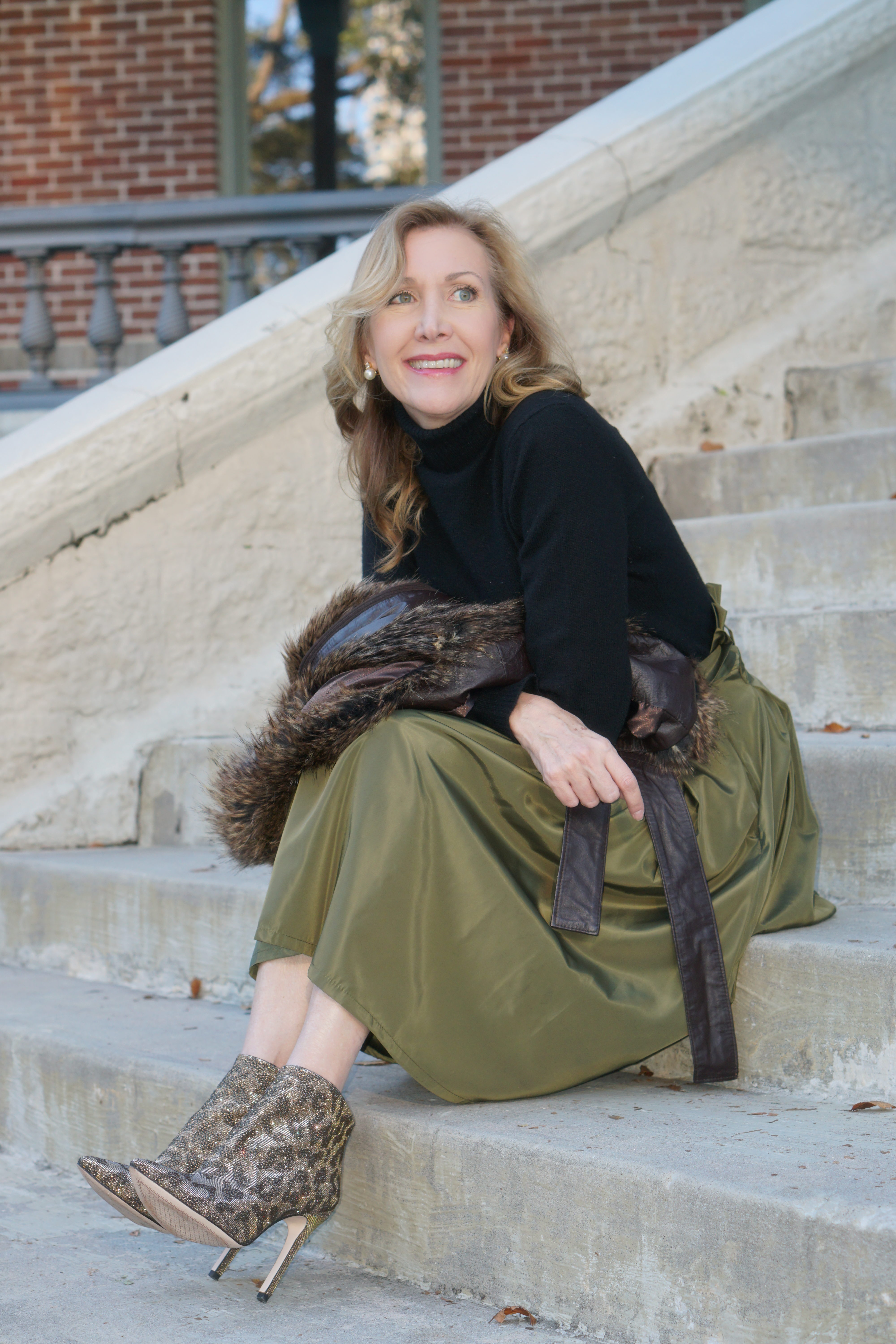 I can’t remember a time in recent history when animal prints weren’t smack on trend.  When I first started seeing it, leopard reminded me of my fashionista grandmother Mimi who was right up to the nano second when it came to being on trend back in the day.  She wore leopard, sequins, and all sorts of shimmering silks and satins.  Hence, I equated leopard to a bygone era which I thought was very dated…until recently.  I am all over leopard and that 1950’s vibe.

This season, I had my eye on leopard booties, but couldn’t pull the trigger, some of the patterns were too bold.  I was afraid they would stand out too much, making them a little more difficult to style and would possibly be less desirable in future seasons.  If I love something, and it just lights me up, I will wear it whether it’s on trend or not.  I know the piece will be a show stopper in years to come.  Otherwise, I buy it at a lower price point or pass entirely. 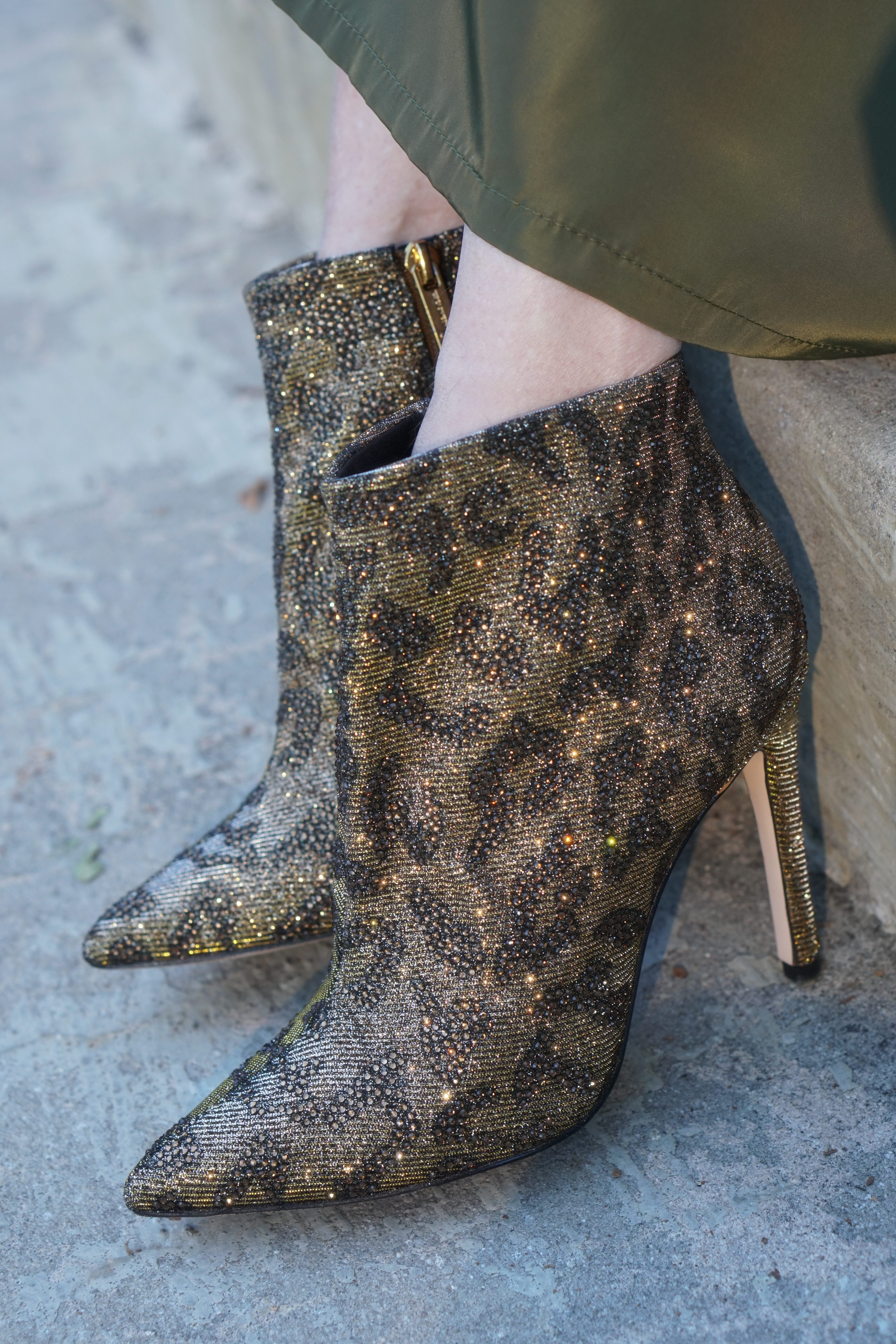 Even though most of the booties I was looking at were under $200, I look at them as a longer term investment.  I finally settled on a pair of Jessica Simpson booties.  With all they have going on, to me, they still read a bit more understated and I figured they’d blend into my wardrobe and style better than some of than some of the other options.

A few seasons ago, I purchased a leopard sweater and a pair of flats from Target as a trial.  I am really loving the sweater and have since I purchased it. I’ve styled it many times–it’s that perfect third piece that takes an outfit up a notch. I haven’t worn the shoes as much because I’m not a huge fan of flats.  (I tried them on again recently, and will probably donate them as flats are just not my thing.  I’m glad I only paid $20 for them at the time.  Not a big loss if I have to give them away.) 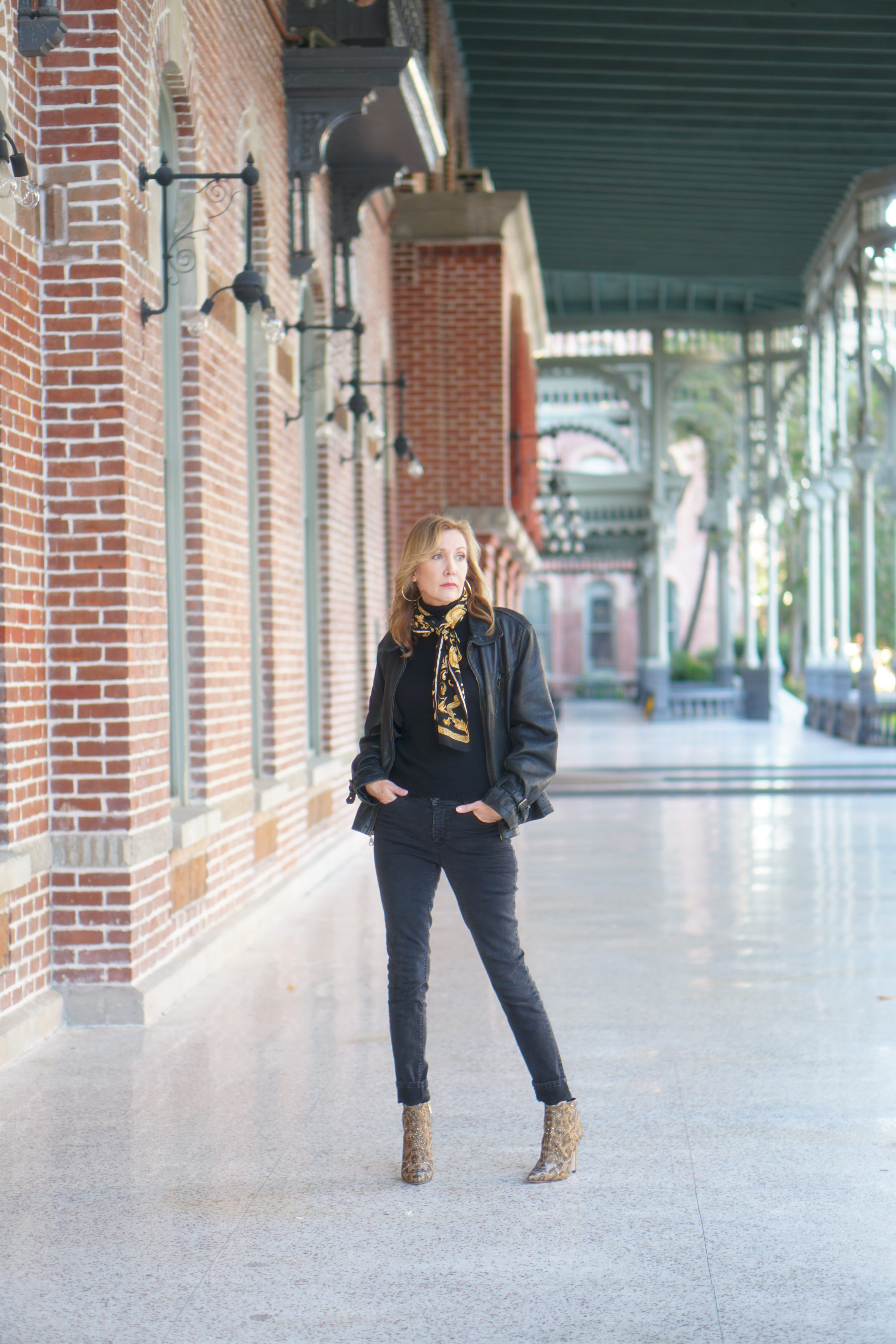 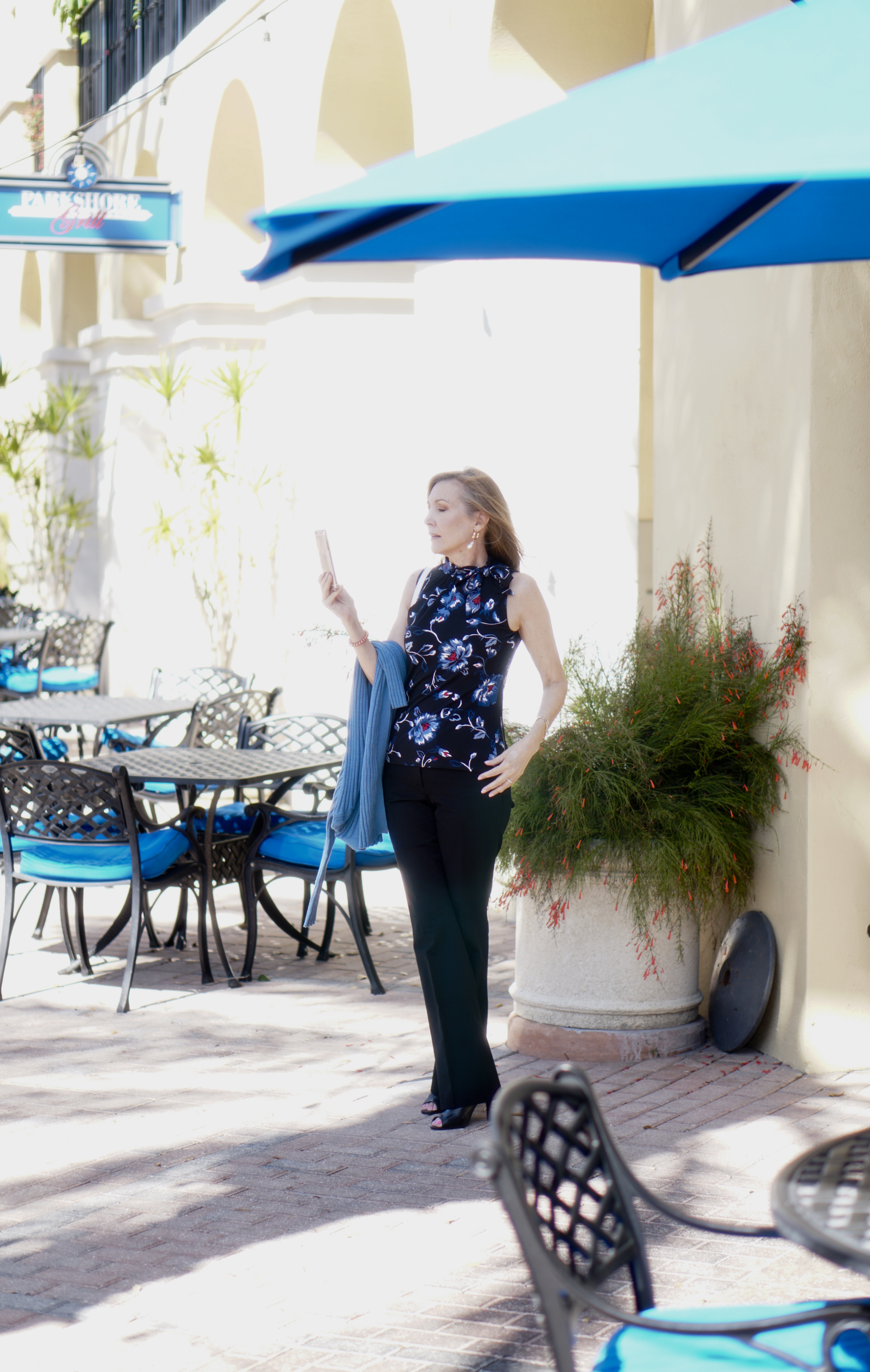 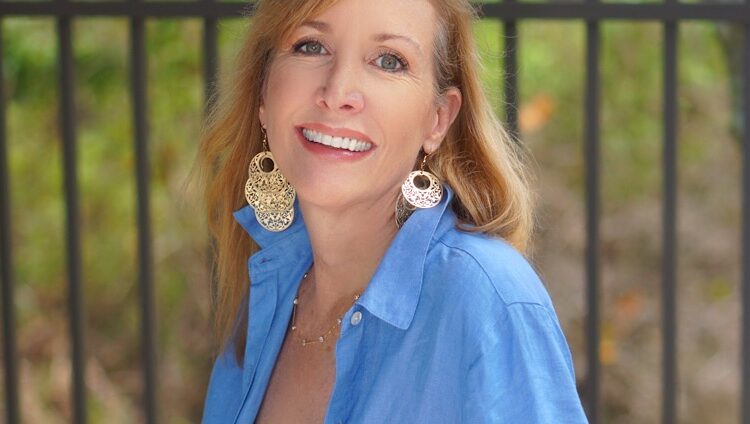 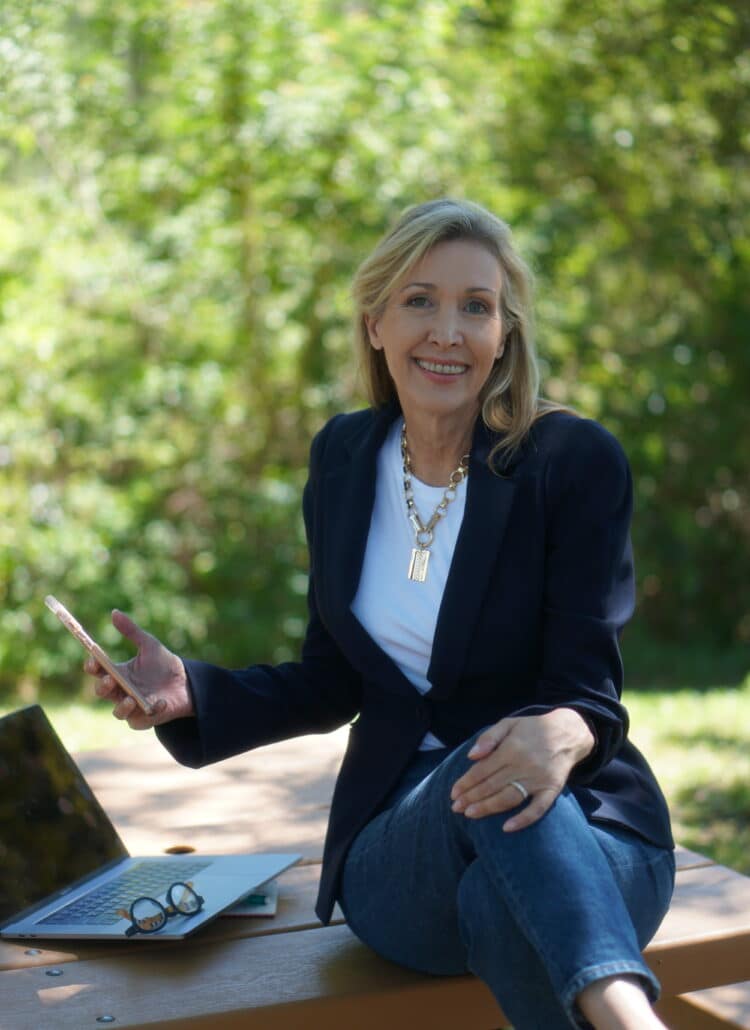 Absolutely the Best Styles of Jeans For Women Over 50

Oh those leopard boots are heavenly!! I adore you scarf too. Beautiful styling and great tips xx Maria
https://www.passionfruitpawsandpeonies.com

Those booties are so glamorous! I love them!

You’re right! Those booties are the perfect animal print…classy, elegant and not too bold. Great find Nina!

How cute are these, you’re going to walk a lot of miles in them. Thanks for sharing and hosting today. Jacqui Mummabstylish

I’ve been thinking of getting leopard print booties for ages but still haven’t made the plunge. Love your outfit!

It’s amazing the amount of leopard I’m seeing. And I’m just like you…I talked myself out of booties for the longest time (the last 2 years to be exact). But I pulled the trigger this year and couldn’t be happier!!
XOXO
Jodie
http://www.jtouchofstyle.com

Oh my gosh, Nina! Those boots are total sparkly awesome. I love how you dressed them up and down. I love all things leopard too and think adding some into your wardrobe is a must. Happy weekend!!!

Those glittery leopard boots are so fab!

I love the olive green skirt in the first picture. Such a great fall color and it looks great with the black and the leopard boots.

I like your idea of using leoprint as a nuance rather than the main event. I was on the Zara site this week and animal print now has it’s own section, including lots of dresses. Surely this is a bit dot.com, a bit overkill, and its bubble has now just got to burst?! Or is it beyond a fad now and is truly established in its own right now that it’s calling itself a neutral? Dunno, but I’m trying to hold myself back in buying too much of it! Hugs, x.

Oh my word, those booties are life and heaven and everything in between! So gorgeous! I just got a leopard coat that I need to share on the blog! It is my favorite thing ever…

OMG those boots are amazing and I love the luxurious green skirt too.

Oh wow, those sparkly ankle boots are fabulous! I love the cardigan too.

How beautiful are your boots! I have had a thing for boots this year, getting a brocade pair, I bought a leopard pair last year and wear them all of the time. Love your gold scarf with your outfit too.
Have a great day!
jess xx
http://www.elegantlydressedandstylish.com

Dang girl getting in on that extra sparkle with the leopard! I love them and how fierce they are! You styled them so perfectly with the skirt and that coat!

Those booties are pretty amazing. I like a lot of Jessica Simpson styles, good find. What a fun story about your Mimi, a great memory to have! It’s pretty amazing just how many variations of leopard there are right now. Some of them are much easier to work with than others. Nice job, Nina.

I love the glamour of all your looks! I find that animal print elevates ny look – especially these sparklies!! xx 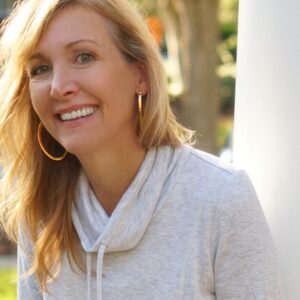 This website uses cookies to improve your experience while you navigate through the website. Out of these, the cookies that are categorized as necessary are stored on your browser as they are essential for the working of basic functionalities of the website. We also use third-party cookies that help us analyze and understand how you use this website. These cookies will be stored in your browser only with your consent. You also have the option to opt-out of these cookies. But opting out of some of these cookies may affect your browsing experience.
Necessary Always Enabled
Necessary cookies are absolutely essential for the website to function properly. These cookies ensure basic functionalities and security features of the website, anonymously.
Functional
Functional cookies help to perform certain functionalities like sharing the content of the website on social media platforms, collect feedbacks, and other third-party features.
Performance
Performance cookies are used to understand and analyze the key performance indexes of the website which helps in delivering a better user experience for the visitors.
Analytics
Analytical cookies are used to understand how visitors interact with the website. These cookies help provide information on metrics the number of visitors, bounce rate, traffic source, etc.
Advertisement
Advertisement cookies are used to provide visitors with relevant ads and marketing campaigns. These cookies track visitors across websites and collect information to provide customized ads.
Others
Other uncategorized cookies are those that are being analyzed and have not been classified into a category as yet.
SAVE & ACCEPT
wpDiscuz
19
0
Would love your thoughts, please comment.x
()
x
| Reply